A visitor comes to your website all giddy to learn more about your product, when suddenly a snazzy slideshow loads with some snap. Impressed, they go to register and are greeted by a most elegant modal window. At this point they are finally overjoyed by the velociraptor that suddenly charges across their screen. They don’t know why but they like it.

Today, we are thrilled to introduce two new jQuery plug-ins that were developed exclusively for Smashing Magazine readers to liven up your developer tool belts: Orbit, a new slider; and Reveal, a modal plug-in.

Why Create Our Own?

Quickly, before diving into the details, some background would be helpful. There are hundreds of jQuery image and content sliders and probably thousands of modal plug-ins. So, why create our own? We wrote these for a number of reasons, the most important ones being:

Meet Smashing Email Newsletter with useful tips on front-end, design & UX. Subscribe and get “Smart Interface Design Checklists” — a free PDF deck with 150+ questions to ask yourself when designing and building almost anything.

Have a look at a couple of our previous articles:

First up is our new jQuery slider, Orbit. At a mere 4 KB, Orbit can handle images, linked images and straight-up content blocks. Setting it up takes just a few minutes, and it has some styles out of the box. We started working on Orbit because of all the many jQuery image sliders, none seemed straightforward to implement or had nice default styles. After several iterations and releases, the addition and removal of a number of features and some serious learning, we had a plug-in that perfectly fit our needs.

Let’s dive into the code, shall we? 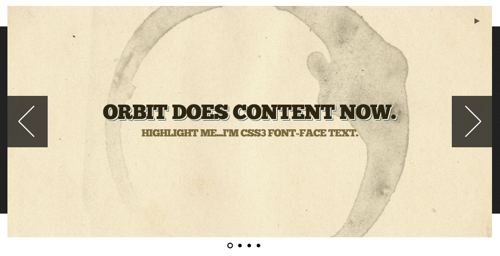 To get started, you’ll need jQuery and the Orbit plug-in (make sure jQuery is attached first).

Now we can quickly hook up the CSS that we need:

Finally, let’s dig into the mark-up.

Just a couple of notes before moving on:

All we need to do now is activate the Orbit plug-in.

There you have it: Orbit, implemented and ready to be used with all of the default settings. To see more options, clean up the slider and do more advanced customization, please continue reading.

Of course, you’ll want some other features like HTML captions, bullet navigation (with thumbnails), and using content instead of images. Here’s the low-down on how to get these going.

Here are all of the plug-in parameters and their default states. The options are commented out to the right. Go nuts!

Orbit has full HTML captions, so you can add styles, links, lists or whatever else your coding heart desires.

Want to animate those captions? Just change the captionAnimation parameter (fade, slideOpen, none).

Getting a new bullet navigation is as easy as passing a parameter when you call the Orbit function. The bullet navigation is natively an unordered list, but in the example and in the kit we’ve replaced them with nice little round bullets. (Changing this is a just a matter of changing the CSS to whatever you’d like.)

Orbit can now pull thumbnails for your bullet navigation! First, create your thumbnail and save it somewhere in your file directory. Below is the HTML, CSS and JavaScript to make it work:

Orbit is text-compatible, too. It can be mixed with images, but just make sure your text is in a div tag and has a background of some type (otherwise the images behind it will be visible). To make the text look nice, give it a background (so that other images in Orbit don’t bleed behind it). Just drop it right into the mark-up, this way:

Using only text? Orbit relies on image sizes to get its dimensions. However, you can just go into the Orbit CSS and find the .orbit div declaration and set it to the exact pixel width and height you want.

Orbit looks fairly reasonable out of the box (so to speak), but getting a real polish requires a couple more bits of work: in particular, getting a load before images pop in, and adding fixes for some less fortunate browsers (i.e. IE).

For those in pursuit of the ultimate polish, we’ve made it easy to create a simple loading state for your slider. Add the following declaration anywhere in the CSS (just replace featured with your slider’s ID, and use your own images’ widths and heights):

Apply the CSS to your unique slider ID, because the plug-in won’t know the ID until after it loads. Adding this CSS will prevent any unstyled content from flashing before the plug-in finishes loading. These styles are in the demo CSS in the kit.

The way Orbit works is that your container gets wrapped by another container. This means that if you are positioning your slider absolute or want to center it with margin: 0 auto, applying these to your slider’s ID (#featured in this example) won’t work. The best way to solve this is to put all positioning pieces on your ID and div.orbit-wrapper.

Note: You could also just position the parent container of the Orbit slider if there is one.

As we all know, IE is not a designer or developer’s best friend, but we’ll try to make it easy on you. As of version 1.1, Orbit works in IE7+, but because CSS3 transforms and RGBa aren’t available, we have to perform some magic to fix the timer and caption default background. The easiest way to fix these issues is to hide the timer and to use Microsoft’s proprietary alpha solution. You can use the following conditional declaration in the header of your document. 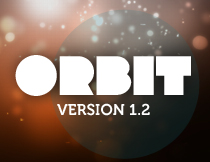 ### Orbit: jQuery Image Slider Orbit helps you make your images slide around. Check out our demo to see the plug-in in action. It works best in Chrome, Safari, Firefox 3.5+ (but is tested for IE 7+, Firefox 3.5+, Chrome and Safari). Live demo » | Download the kit »

You can create beautiful modal windows on your page with our jQuery Reveal plug-in. Modal windows allow developers to make critical information stand out. Setting up Reveal modals takes only three easy steps. Attach the needed files, drop in the modal mark-up, then add an attribute to your button.

We created Reveal because we couldn’t find a simple solid solution. We often used and reused our own scripts to create modals because existing plug-ins were too heavy (they allowed for Flash integration and a hundred other things), and they didn’t use basic CSS to create flexible, reusable code. We think we’ve solved both of these issues with Reveal.

Reveal is useful because it’s easy to implement, compatible with modern browsers (with some graceful degradation, of course) and lightweight (coming in at only 1.75 KB). What this means for you is that it’s fast, sexy and just works.

Let’s see how you can get Reveal working!

Clearly, you need the Reveal kit (.zip) to do this, so please download it first.

Just give your modal div the class reveal-modal and a unique ID (we’ll use the ID to launch this modal). The anchor with the class close-reveal-modal provides a button to close the modal (although by default, clicking the faded black background will also close the modal). Placing the mark-up just before the closing body tag is usually best.

While the data-reveal-id is a great way to make firing a modal easy, it will often need to be fired programatically. That’s easy enough, too:

Good plug-ins have options, and this one has just a few, but important ones:

If you are wondering how to use the options when you’re using the data-reveal-id implementation, it’s easy: just take the option and add the data- before it, and pass a valid value. Here it is with the default values: 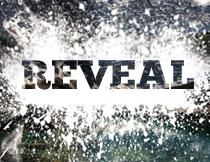 ### Reveal: jQuery Modal Plug-In Surprise your visitors with some elegant modal windows. Download our lightweight modal plug-in and start popping up informative and varied dialogs on your pages. Check out the demo to see this plug-in in action. Live demo » | Live demo »
## Bonus: Raptorize jQuery Plug-In We've all been there: sitting at your desk, coding a large website, knee-deep in Extreme Cheddar Doritos, sipping on a liter of Code Red Mountain Dew, when you realize that this page would be…

You immediately race home to grab your Jurassic Park DVDs, so that you can screencap a velociraptor attack. Then you realize how hard it would be to make a raptor run across the website you're coding. Plus, how will you get that distinctive velociraptor screech? We'll let you in on a little secret… We've already done it. Raptorize was created because there was a meme going around the design community about putting velociraptors in visual designs, and we thought there was serious potential for that to live in code. We also wanted to play with some animations, HTML5 audio tags and the Konami Code! 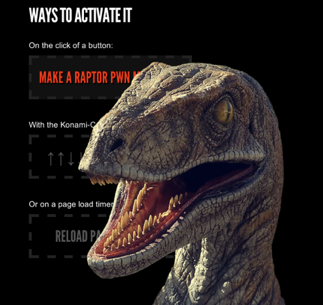 First things first: you need to download the Raptorize kit. It has:First, attach the scripts and activate the plug-in in the head of your document:The only thing to know here is that you need an anchor or element with the class myButton. And there you have it. You're done! ### The Options What's that? You want to be able to control the entrance handler? You can! Raptorize can be activated on a click event (which is the default), on a timer that fires only after the page has loaded, or on the legendary Konami Code. Our personal favorite is the Konami Code (but it only works once per page load).Go ahead, try the Konami Code: ↑ ↑ ↓ ↓ ← → ← → B A. If you don't want to store the Raptor image and sound files in the same directory as your JavaScript, just open the plug-in and edit the location of the assets in the first two variables of the code (raptorImageMarkup and raptorAudioMarkup). While the awesomeness that is the Raptorize plug-in is 100% original code, the idea of including a glorious raptor in a design is not. We owe credit to Phil Coffman and Noah Stokes for the raptor assets and the brilliance of adding a raptor to a design. 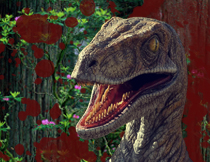 ### Raptorize: jQuery Plug-In Want to relive the glorious ’90s cinematic action-adventure dinosaur flicks on the pages of your website? We have the solution for you. Live demo » | Download the kit »
Hopefully these tasty new treats will liven up your pages and make for a more enjoyable experience for you and your visitors.